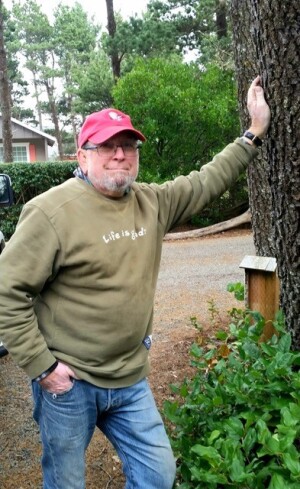 James (Jim) Walter Bleckov, age 73, lost his 2-year battle with Multiple Myeloma on May 1st this year. Over the past 4 years Jim was challenged with many health issues, cheating death seven times. He amazed the doctors with his determination and resilience. This past August we had moved to the wonderful town of Chehalis where there are great close medical services. The Providence Hospital and Oncology group took extra special care with Jim that he so deserved.

Jim married Peggy in 1988 and they had a wonderful 32-year marriage. Jim was born and raised in Seattle, WA. He followed in his Father William's footsteps in all aspects of construction. He was an exceptional master carpenter and his love of working with wood produced many memorable homes, tables, countertops, and even a flower cart made of reclaimed lumber for Peggy to sell dahlias from. Jim also enjoyed traveling: Alaska, Germany, Amsterdam, Holland, the Viking cruise line was a lovely way to go. Ireland was the most amazing! Jim drove on those crazy roads all away around the Island in 8 days which is quite a feat according to the rental car agent when we brought the car back to Dublin. We also enjoyed seeing America, the National Parks, Charleston and the surrounding area, the mid-west and east coast. So many good memories.

After 8 years of marriage, Jim was restless to move somewhere to build that didn’t have the long permitting time and red tape that was becoming the norm in Seattle. We looked for two years to find the perfect spot to live and work with the idea of building a small lodging business. We were elated when we found four acres of wooded land on the west side of the highway with 200’ of ocean front.

We both had the same vision and got right to work clearing for the road and carving out space for 10 rental cottages, leaving enough trees and vegetation to give each cottage a very private feeling. We also added a gift and temperature-controlled wine shop, with all the shelving hand made by Jim. As another treat for the guests, Jim built a quaint potting shed, surrounded by large, raised planters we filled with flowers and herbs for the guests to use and enjoy. Out of all the houses Jim built over the years in Seattle, he was most proud of our little community called Blackwood Beach Cottages. That is his legacy which garnered many outstanding accolades from Coastal Living magazine, Sunset Magazine, Seattle’s Best Places, The Oregonian, Seattle Times, and the Chinook Observer all come to mind.

Jim was so much more than just a builder, he was an excellent judge of character and had a gift of spotting a phony a mile away, he enjoyed and admired self-made people who were honest, unpretentious, and hard working. Jim was always ready to lend a helping hand when he had a friend in need. He especially enjoyed the older characters we met when we first moved there.

Cecil, our neighbor, was tuning 90 and had never been in a helicopter. Jim arranged a flyover for the two of them and all the guests in the cottages were out on their patios waving happy birthday to Cecil. It was a big day for him and made everyone who witnessed it feel great!

Jim is survived by a family he truly loved, wife Peggy, brothers Jerry and Tom, sister Jean, nephew Matt, his wife Anne and their children, niece Venessa, husband Rhett and their daughter.

At Jim’s request only a small private graveside service will be held. He will be laid to rest in Seattle at Lake View Cemetery next to Volunteer Park. Jim’s body is currently held at Newell-Hoerling’s Mortuary in Centralia. They have been a calming and wonderful group to work with which I am very grateful for.

Rest in peace my Darling, I miss everything about you

To send flowers to the family or plant a tree in memory of James "Jim" Walter Bleckov, please visit our floral store.

You can still show your support by sending flowers directly to the family, or by planting a memorial tree in the memory of James "Jim" Walter Bleckov
Share a memory
© 2022 Newell-Hoerling's Mortuary. All Rights Reserved. Funeral Home website by CFS & TA | Terms of Use | Privacy Policy | Accessibility